By now you may have heard that President Donald Trump signed an executive order banning Americans from investing in a select number of Chinese firms that have ties to China’s military.

Since we invest heavily in the country and other Asian economies, through our China Region Fund (USCOX), I figured it’d be helpful to clarify any concerns investors might have.

Simply put, Trump’s ban will not impact our investment strategy in any way. None of the 31 companies listed in the executive order, many of them involved in construction or technology, was held in USCOX as of September 30.

I don’t believe the directive will affect very many Americans’ portfolios, to be honest. It doesn’t ban new purchases of the companies until November 2021, and it allows investors to continuing holding and liquidating the targeted securities indefinitely.

Plus, President-Elect Joe Biden could very well roll back the executive order when he takes office in January.

Can China Double the Size of Its Economy by 2035?

Whether deserved or not, Trump’s actions against China bring additional negative attention to what I believe remains an extremely attractive region for investors to consider.

In the short term, China may end up being the only major economy to report growth in pandemic-hit 2020. Factories have returned to pre-crisis levels, and consumers are spending again.

On Monday, China released economic data for October showing that industrial output accelerated 6.9% over the same month last year, while retails sales grew 4.3% year-over-year, up from 3.3% in September. 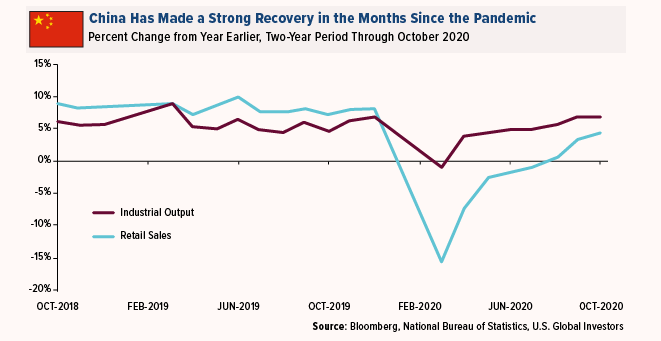 On a longer-term basis, I’m incredibly bullish on China. Its five-year plan for 2021 – 2026 seeks high-quality growth over high-speed growth, continued modernization through innovation and technological advancements and the promotion of high-end, “green” production.

Officials now aim to double the size of the Chinese economy by 2035, which is 15 years from now. According to the World Bank, the country’s gross domestic product (GDP) was $14.3 trillion in 2019. You do the math.

Is that even possible? Past performance is no guarantee of future results, of course, but it’s worth pointing out that China managed to expand the size of its economy by a factor of 7 in the 15 years between 2004 and 2019, from roughly $2 trillion to more than $14 trillion.

I believe China’s ambitious economic goals should be supported by its inclusion in the just-created Regional Comprehensive Economic Partnership (RCEP). The free-trade agreement (FTA), believed to be the largest in history, brings together 15 Asia-Pacific countries—including, for the first time ever, China, Japan and South Korea—into one monster trading bloc that will account for 30% of the global economy and population.

Below you can see the member nations in the RCEP, and how some of them are also included in the Comprehensive and Progressive Agreement for Trans-Pacific Partnership (CPTPP). That’s the FTA that went into effect in December 2018, and which President Trump pulled the U.S. out of following his inauguration in 2017. 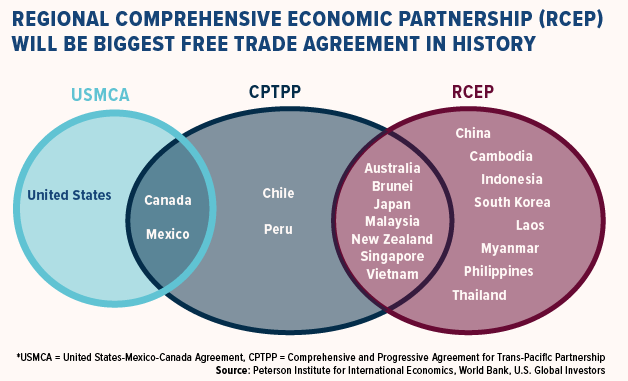 It’s impossible to overstate just how significant the RCEP is, not only for the region but the world. In June of this year, the Peterson Institute for International Economics (PIIE) estimated that the RCEP could add $209 billion annually to world incomes, $500 billion to world trade by 2030.

The reason this is such exciting news is that the agreement wipes away at least 92% of all existing tariffs between the 15 participating nations. This should allow goods and services to be traded more freely, fairly and efficiently.

That benefit, I believe, will be extended to goods and services produced by companies in our China Region Fund (USCOX).

The China region has experienced many changes since the fund opened in 1994, but we believe the region continues to hold further investment opportunities. Many countries in the region possess characteristics similar to the U.S. prior to the industrial revolution: a thriving, young workforce, migration from rural to urban areas and shifting sentiment toward consumption. 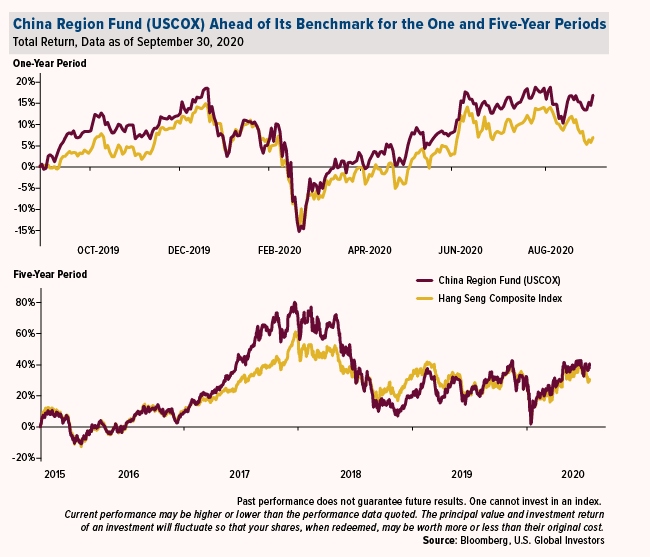 Expense ratios as stated in the most recent prospectus. The Adviser of the China Region Fund has voluntarily limited total fund operating expenses (exclusive of acquired fund fees and expenses of 0.00%, extraordinary expenses, taxes, brokerage commissions and interest, and advisory fee performance adjustments) to not exceed 2.55%. With the voluntary expense waiver amount of 0.22%, total annual expenses after reimbursement were 2.44%. U.S. Global Investors, Inc. can modify or terminate the voluntary limit at any time, which may lower a fund’s yield or return.

Performance data quoted above is historical. Past performance is no guarantee of future results. Results reflect the reinvestment of dividends and other earnings. For a portion of periods, the fund had expense limitations, without which returns would have been lower. Current performance may be higher or lower than the performance data quoted. The principal value and investment return of an investment will fluctuate so that your shares, when redeemed, may be worth more or less than their original cost. Performance does not include the effect of any direct fees described in the fund’s prospectus which, if applicable, would lower your total returns. Performance quoted for periods of one year or less is cumulative and not annualized. Obtain performance data current to the most recent month-end by clicking here.

The Hang Seng Composite Index offers a comprehensive Hong Kong market benchmark that covers about the top 95th percentile of the total market capitalization of companies listed on the Main Board of the Stock Exchange of Hong Kong. It is not possible to invest in an index.

Mutual fund investing involves risk. Principal loss is possible. Foreign and emerging market investing involves special risks such as currency fluctuation and less public disclosure, as well as economic and political risk. By investing in a specific geographic region, a regional fund’s returns and share price may be more volatile than those of a less concentrated portfolio.

Fund portfolios are actively managed, and holdings may change daily. Holdings are reported as of the most recent quarter-end. Fund holdings should not be considered a recommendation to buy or sell any security. Holdings in the China Region Fund as a percentage of net assets as of 9/30/2020: Alibaba Group Holdings Ltd. 6.06%.

All opinions expressed and data provided are subject to change without notice. Some of these opinions may not be appropriate to every investor.