As one analyst put it, this was truly our first digital-first Black Friday. Few shoppers ventured out last week during what has historically been the kick-off to the big, big crowds of the holiday season.

Customer traffic at Dallas shopping centers — from Allen to Grand Prairie and Grapevine to Mesquite — is way below last year, which is not surprising for a holiday season in the midst of a pandemic.

Some shopping centers fared worse than others, though.

New data from Placer.ai gathered from 10 shopping centers for The Dallas Morning News showed that traffic during the usually busy Black Friday week ranged from down only 9.3% at Highland Park Village to down 54.6% at Plano’s Shops at Willow Bend.

The 10 properties were selected for their geography and by the type of center — we looked at shopping centers in Dallas, Allen, Frisco, Garland, Grand Prairie, Grapevine, Mesquite and Plano and everything from major malls to outlet centers. Placer.ai, a foot-traffic analytics firm that uses location data from mobile devices, analyzed customer trends from Monday, Nov. 23, through Sunday, Nov. 29, vs. the same week last year.

Traffic for these 10 shopping centers will be updated weekly through the rest of the holiday season.

While customer counts are a key measure of shopping center performance, they don’t always provide a clear picture about sales volumes. While it was evident last week that fewer people were out, the shoppers who went to malls were buying, not browsing.

People were carrying bags and shopping alone or with one other person. Big groups of families looking to kill some time with their out-of-town guests were absent this year. Shoppers are using curbside pickup, and stores are trying to make it fun. Neiman Marcus had a curbside Santa at NorthPark last Saturday who helped load shopping bags into cars.

Dallas’ two enclosed malls, NorthPark Center and Galleria Dallas, had brisk crowds on Black Friday, but their traffic for the week was down 48% and 41.7%, respectively.

Outdoor centers Allen Premium Outlets and Grand Prairie Premium Outlets had smaller declines in traffic (-34.2% and -36.1%) than at Garland’s Fire Wheel Town Center (-47.4%), which has a more traditional mall mix of stores but is also an outdoor property. Grapevine Mills, an enclosed outlet center, was down 46% vs. last year.

The crowds at most malls on Black Friday looked more like a busy Saturday pre-pandemic. There is a bright side: Parking isn’t quite the pain it used to be at some popular centers.

People worried about crowds should think back to where they shopped last year. The Shops at Willow Bend in Plano wasn’t very crowded last year on Black Friday, and this year traffic was half that. Mesquite’s Town East Mall, which is usually one of the area’s busier Black Friday malls, had a 41.7% decline in traffic. Frisco’s Stonebriar Centre had a 50.9% drop in traffic. 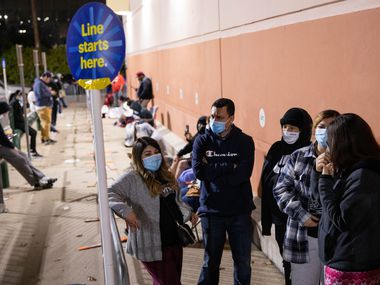 Since September, when Gov. Greg Abbott updated his executive orders for opening the state, retailers and shopping centers have been under 75% capacity limits. Employees don’t count toward the occupancy rate.

Most locations didn’t have to monitor the official capacity limits for Texas stores and shopping centers last week.

While traffic is way down, there are still some lines. There was a line at the Louis Vuitton stores at Galleria Dallas and NorthPark and at the brand’s shop inside Neiman Marcus at NorthPark. Tory Burch at Allen Premium Outlets had a line. Other popular brands such as lululemon and Nike routinely have lines, even when it’s not Black Friday.

The day after Thanksgiving has traditionally been used by retailers to get an early read on the holiday season, but based on declining in-store demand, a shift to an extended period of holiday discounting and customers’ preference for e-commerce, the day’s “status as a bellwether of holiday retail has now passed,” according to the longtime retail analysts at Coresight Research.

The firm, which coined last week the first digital-first Black Friday, predicts that next year, consumers will retain some behaviors even if the current crisis ends.

The coming weeks’ Placer.ai data will reveal whether Dallas-area holiday shoppers will continue to shop from home or whether their desperation to find the right gift will send them out to shop in bigger numbers.

Looking for more retail coverage? Click here to read all retail news and updates. Click here to subscribe to D-FW Retail and more newsletters from The Dallas Morning News. 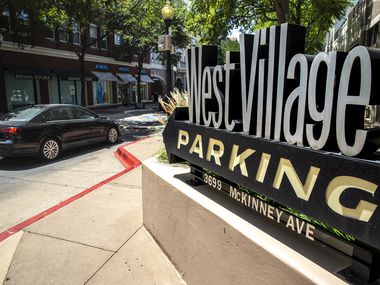