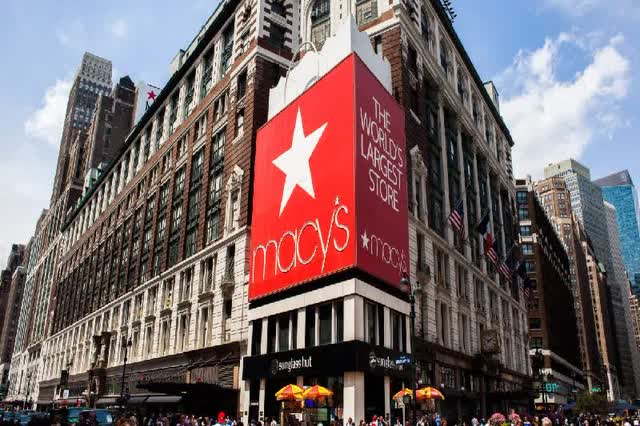 Macy’s (NYSE:M) reported revenue of $3.99 billion, Non-GAAP EPS of -$0.19, and GAAP EPS of -$0.29. The company beat on revenue and earnings. The stock is practically flat post-earnings. I had the following takeaways on the quarter.

The knock-on effects of the coronavirus have practically brought business activity to a halt. Shelter-in-place policies have led to millions of people working from home. The lion’s share of shopping has happened online to the chagrin of traditional retailers like Macy’s. The company has had to rely heavily on its digital platform to drive sales, pitting it head-to-head with bigger players like Amazon (NASDAQ:AMZN), Target (NYSE:TGT) and Walmart (NYSE:WMT). Total revenue of $4.2 billion fell 22% Y/Y. However, digital sales were up about 27%. Macy’s said:

Our digital business as an omni channel retailer remains strong in the quarter growing by approximately 27%. As expected with all the stores opened during the quarter, digital penetration moderated to about 38%, up significantly from last year by more than 14 percentage points. Store sales decline improved to about 36%, slightly better than expected, again largely due to the pull forward of sales.

It was not as impressive as the 53% growth from the August quarter, yet Macy’s proved its digital operations can deliver if called on. It also proved the company can reach customers who would rather shop online even after the economy fully reopens. Nonetheless, digital growth was not enough to offset the revenue decline through stores.

From a product perspective, textiles, housewares, Home Entertainment and decor, all generated double-digit percentage sales increases. These items likely benefited from customers spending more time at home. Overall apparel sales were down, which could be a cause for concern. Customers may focus less on apparel amid shelter-in-place policies. There is a light at the end of the tunnel. Clinical trials suggest Pfizer (PFE) and BioNTech (BNTX) have developed a vaccine that is 95% effective against COVID-19. Promising vaccines from Pfizer and Moderna (NASDAQ:MRNA) mean the economy could reopen sooner than expected. Sales through physical locations owned by Macy’s could also return closer to normal.

Macy’s struggled with declining margins prior to the pandemic. This quarter, the company reported a gross margin of 35.6%, down about 440 basis points versus the year earlier period. Gross profit was $1.6 billion, down 28% Y/Y. The bright spot was that the gross margin was much higher than the 23.6% reported in the August quarter. Better inventory management and fewer markdowns led to the margin improvement. This was positive for Macy’s and proved the company could move product without resorting to heavy discounting.

SG&A expense was $1.7 billion, down 22% Y/Y, which was almost in line with the decline in revenue. The fallout was that EBITDA of $139 million fell 54% Y/Y. Macy’s reported an EBITDA margin of 3.3%, down over 200 basis points versus the year earlier period. The company reported an EBITDA loss during the August quarter, so positive EBITDA this quarter could be considered a win. If Macy’s can generate positive EBITDA amid the pandemic, then its prospects could potentially improve after the economy reopens. This could be the bull thesis, yet the jury is still out.

Retailers must maintain liquidity amid shrinking sales. The retail space may come down to companies with liquidity and those without. Macy’s ended the quarter with $1.6 billion in cash, up from $301 million in the year earlier period. Like several competitors, the company had to turn to the credit markets a few months ago to shore up its cash position. The company has a working capital of $706 million, down from $1.8 billion in the year earlier period. Working capital included $5.1 billion of inventory, which was much lower than the $7.3 billion amount Macy’s carried in the year earlier period. Management may want to ensure the company does not miss out on holiday sales. The risk is that holiday sales could be poor, leaving Macy’s will billions in unwanted product.

Free cash flow (“FCF”) through the first 39 weeks of the year was -$142 million. A lot is riding on holiday sales, which will likely determine whether the company ends the year with more cash burn or positive cash flow. Total debt was $5.4 billion, up from $4.7 billion in the year earlier period. Rising debt and falling EBITDA sounds like a recipe for disaster. The situation could correct itself once the economy reopens. The company’s debt-to-last 12 months (“LTM”) EBITDA was 2.7x.

Carrying such a large debt load may not be prudent for Macy’s. The company was struggling prior to the pandemic, amid underperforming stores. The company has been winnowing stores and wringing out costs, yet it remains uncertain if management has captured the right balance between digital sales and sales through physical locations. The retail space will not be any less competitive after the pandemic ends. Macy’s will have to compete with retailers with large digital platforms and off-price retailers poised to serve price-conscious consumers.

The quarter was good, but not good enough. Macy’s will likely struggle after the economy reopens. Sell the stock.

I also run the Shocking The Street investment service as part of the Seeking Alpha Marketplace. You will get access to exclusive ideas from Shocking The Street, and stay abreast of opportunities months before the market becomes aware of them. I am currently offering a two-week free trial period for subscribers to enjoy. Check out the service and find out first-hand why other subscribers appear to be two steps ahead of the market.

Pricing for Shocking The Street is $35 per month. Those who sign up for the yearly plan will enjoy a price of $280 per year – a 33% discount.

Disclosure: I am/we are short M. I wrote this article myself, and it expresses my own opinions. I am not receiving compensation for it (other than from Seeking Alpha). I have no business relationship with any company whose stock is mentioned in this article.

real estate
We use cookies on our website to give you the most relevant experience by remembering your preferences and repeat visits. By clicking “Accept All”, you consent to the use of ALL the cookies. However, you may visit "Cookie Settings" to provide a controlled consent.
Cookie SettingsAccept All
Manage consent