This is part of a monthly series where we highlight notable share price moves and rating changes in our research coverage. The goal is to identify the most attractive opportunities each month and to provide a full track record of our research. Similar content previously formed part of our monthly fund updates.

November was one of the best months for equity markets on record, with the S&P 500 scoring its largest ever monthly gain, and the MSCI World gaining 9.2% in U.K. pounds (12.8% in U.S. dollars). Favorable developments on multiple COVID-19 vaccines likely had the biggest influence, though results of U.S. presidential and congressional elections were also received positively.

The broad-based rally in stock prices also had an impact on the forecasted annualized returns of key companies in our coverage, which are shown below along with their current and assumed exit P/E multiples:

Charter (CHTR) gained “only” 8.0% in November and is again back at the #1 spot. It remains our highest-conviction buy and a top-5 portfolio holding.

Tobacco stocks continue to dominate the top of our list, with Altria (MO), British American Tobacco (BTI) (referred here as “BAT”), Swedish Match (OTCPK:SWMAF) and Philip Morris (PM) constituting 4 of the top 6 names in forecasted returns. (Note that our stock selection is holistic, taking into account qualitative considerations as well as downside risks, so the highest forecasted return does not always mean our most preferred stock.)

Despite the supposed rotation into “value” names, these 4 tobacco stocks have all gained less than 10% during November, with Altria gaining 9.7%, BAT gaining 7.4%, PM gaining 6.1% and Swedish Match gaining 3.0% (all figures in local currencies).

In general, COVID-19 has been a positive for cigarette sales in Developed Markets (higher consumption due to stay-at-home, lower illicit trade), but a negative in Emerging Markets (more macro-economic impact, weaker currencies), as shown in PM’s regional P&L below:

Tobacco companies also suffered from the loss of Duty Free sales, which for PM and BAT were a low-single-digit percentage of group sales and at higher margins before COVID-19. We believe PM, BAT and IMB are all net losers from the outbreak, while Altria and Swedish Match are net winners. The broad underperformance of tobacco stocks thus cannot be explained by the progress on COVID-19 vaccines alone. There were no other material news during the month except Imperial Brands’ (OTCQX:IMBBY) FY20 results (more below), which had limited read-across for other tobacco companies.

Hargreaves Lansdown (OTCPK:HRGLF), highlighted in last month’s update, gained only 5.4% during November, and still offers a high-teens annualized return in our forecasts. However, its shares were actually up by as much as 19% (to 1,615.5p) at mid-November, only to lose nearly all that gain in the following few days when co-founder Stephen Lansdown sold another £107m ($137m) worth of shares, reducing his ownership from 7.1% to 5.7%. As mentioned last month we believe Hargreaves Lansdown’s business remains fundamentally strong; the continuing share sales by its two-founders (aged 74 and 68 respectively) seem based on personal reasons, and represent an opportunity for long-term investors to add to their positions at artificially lower prices. Shares are currently trading at 24.7x P/E, 3.6% FCF Yield and 3.3% Dividend Yield on FY20 (ending June) financials.

Stocks with Forecasted Annualized Returns Below 10%

Significant price gains during November means that several groups of stocks have seen their forecasted annualized returns over the next few years fall below 10%. While we have not formally revised our Buy ratings, we discuss each group briefly below, including where we may be too conservative.

These groups of stocks share two common characteristics: (1) earnings that are sufficiently impacted by COVID-19 such that their EPS CAGR over the next few years (from 2019) fall below 10%; (2) earning multiples (with respect to pre-COVID 2019 earnings) that provide only limited scope for upward re-ratings. Examples include:

We include the forecasts for JPM in more detail below, as an example on why our forecasted return for both banks has fallen below 10%: We assume JPM’s EPS will remain below its 2019 level even in 2023, when its Return on Tangible Common Equity (“ROTCE”) will be 16% (vs. management’s pre-COVID average “across the cycle” target of 17%); we assume ROTCE will be significantly below this in the preceding years, which limits the size of dividends. We also assume an exit P/E of 12x, only 2.3x above the current multiple (based on admittedly elevated 2019 earnings):

It is possible that our assumptions are too conservative: JPM’s ROTCE was already at 11% for Q1-3 2020, despite $15bn of net reserve build; and JPM shares had traded at a P/E of near 13x just after Q4 2019 results. On the other hand, 2020 has been helped by elevated capital markets and trading revenues, and low interest rates may remain a headwind for several years.

Spirits Companies – Pernod Ricard (OTCPK:PDRDF) (referred here as “PR”) gained 15.3% (in euros) and Diageo (DEO) gained 14.6% (in U.K. pounds) during the month, reflecting expectations that the end of COVID-19 and a recovery in on-premise alcohol consumption are now near. Pernod Ricard also released a sales update, with Q1 FY21 (July-September) year-on-year sale decline of 5.6% representing a significant sequential improvement:

Both Diageo and PR now have forecasted annualized returns of less than 10% because of similar dynamics as described above for JPM. Taking Diageo as an example, we expect its EPS to recover to the pre-COVID FY19 figure only in FY22, and the exit price is calculated on a FY23 EPS that is only 16% above FY19’s (implying a 3.0% CAGR). This means, even with an upwards re-rating to 24x (from the current 21.6x on CY19 EPS), our forecasted annualized return over the next few years is less than 10%:

Over a longer term, for both companies, since we expect a mid-to-high single-digit EBIT CAGR (higher for Pernod Ricard), and EPS should grow slightly faster than EBIT, annualized returns should still be comfortably in the high-single-digits, based on share prices rising in line with EPS and Dividend Yields of around 2%. However, for annualized returns to exceed 10%, we require either higher exit P/E multiples or higher growth.

Compared to U.S. banks and spirit companies, beauty companies have more long-term growth potential and earnings resilience. L’Oréal has grown its EBIT near 10% in both 2018 and 2019 (as shown below), and we expect this to be its medium-term growth rate; its like-for-like sales only declined by 7.4% in Q1-3 2020 and has returned to positive growth (+1.6%) in Q3.

EL has suffered a larger impact from COVID-19, due to its larger historic exposure to Travel Retail and department stores, but we expect it to emerge from the outbreak with a much more robust and omnichannel distribution. Online was 22% of total sales in FY20, reaching 40% of total sales in EL’s top 3 markets (the U.S., China and the U.K.) at the end of FY20, and online sales on EL brand sites grew 60% year-on-year in the last quarter.

For both L’Oréal and EL, as we expect their annual earnings growth to be near or even above 10% over the long term, and their P/E multiples to be broadly stable, their annualized return should also trend towards 10% over time if we consider a longer investment period beyond the end of 2023.

The performances last month of all the companies in our coverage universe, along with their year-to-date and full historic performances, are below: 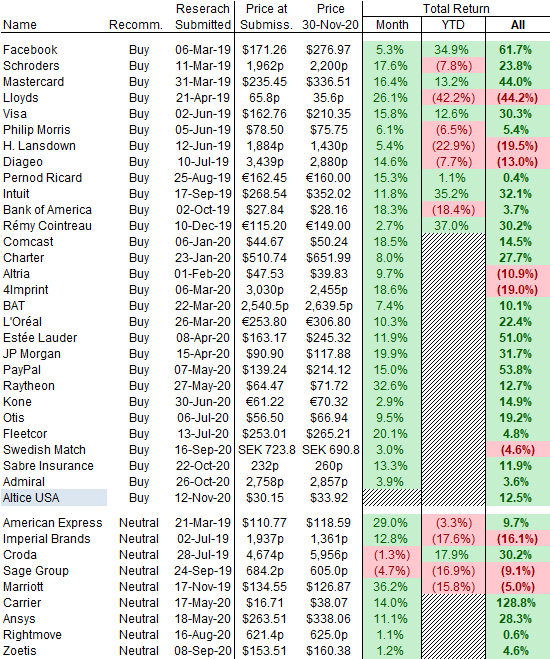 Share price movements in two Neutral-rated stocks were of note:

Imperial Brands gained 12.8% during the month, marginally better than the high-single-digit gains in Buy-rated BAT and PM (described above). Imperial Brands released their FY20 results in mid-November, but these were already partially disclosed in an update in October. More significantly, new CEO Stefan Bomhard reassured investors that there is unlikely to be a margin reset; shares rose 7.3% that day.

Sage Group (OTC:SGGEF) lost 4.7% during November despite the wider market rally, including a loss of 13.4% on the day of its FY20 results. While the results were also partially disclosed in a prior update, management surprised investors by guiding to a margin reset of “up to” 3 ppt in FY21; FY21 revenue guidance was also disappointing, with recurring revenues only expected to grow 3-5% organically. As a contrast to Sage’s struggles, key listed competitor Intuit (INTU) also reported results the day before, and guided to FY21 revenue growth of 8-10%.

During November, we upgraded Altice USA (ATUS) from Neutral to Buy, partly because Q3 2020 results showed that it has upgraded 92% of its network to be capable of delivering 1 Gbps broadband, faster than we expected:

ATUS shares have already gained 12.5% by the end of November, helped by ATUS’s abandonment of its bid for Atlantic Broadband and a subsequent $2.5bn tender for its own shares.

Our previous stock ratings are listed below; the previous Neutral rating on Altice USA has been added to this list: 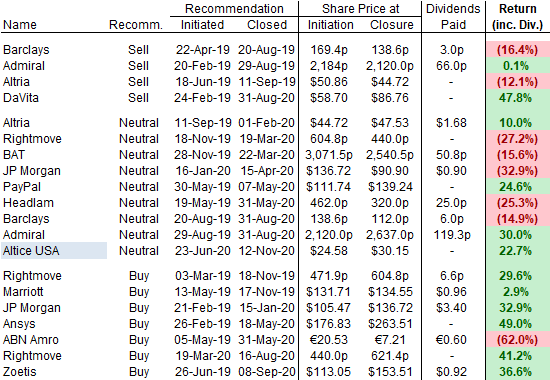 Note: A track record of my past recommendations can be found here.

Disclosure: I am/we are long MANY OF THE STOCKS MENTIONED. I wrote this article myself, and it expresses my own opinions. I am not receiving compensation for it (other than from Seeking Alpha). I have no business relationship with any company whose stock is mentioned in this article.