I don’t remember why I decided not to invest in General Mills (NYSE:GIS) in September 2018 when I published my first and only article about the company. I probably was scared off by the rather low growth rates, but since the publication of the article, the stock actually outperformed the S&P 500 (SPY) – not by much, but it outperformed.

General Mills is a leading global manufacturer and marketer of branded consumer foods sold through retail stores. The company sells cereal, yogurt, soup, snacks, dough, baking mixes and ingredients, ice cream and other staples. And since the acquisition of Blue Buffalo in 2018, General Mills is also a leading manufacturer and marketer in the wholesome natural pet food category. General Mills has about 35,000 employees and is selling its products in more than 100 countries all over the world. 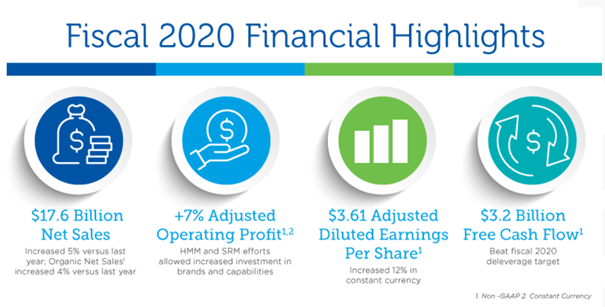 When looking at the fiscal 2020 numbers, it seems General Mills could return on the path towards higher growth rates again after the business rather stagnated in the last few years. In fiscal 2020, General Mills generated $17.6 billion in annual sales, which is an increase of 5% compared to the previous year. The adjusted operating profit increased 7% and adjusted diluted earnings per share increased 12% in constant currency to $3.61.

When looking at the five different segments, the most important segment is “North America Retail” which generated $10,751 million in annual revenue and is responsible for 61% of total revenue. In 2020, revenue could increase 8.3% YoY, and it was therefore one of the drivers of growth. The second driver of growth is the “Pet” business, which could increase revenue from $1,431 million in 2019 to $1,695 million in 2020. This is an increase of 18.4% YoY. The other three segments – Asia & Latin America, Europe & Australia and Convenience Stores & Foodservice – all saw declining revenue in the last two years and generated between $1.5 billion and $2 billion in annual revenue. 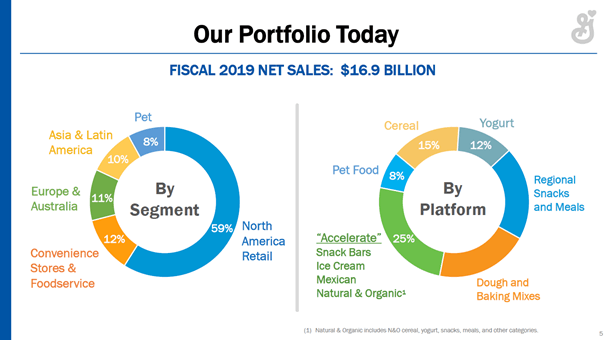 When looking at the high growth rates a little closer, we have to point out two aspects that might have contributed to the high growth rates, but will probably not contribute in the years to come. First of all, General Mills had an additional week in 2020, which contributed about 2.5 pts to reported net sales growth. And a second contributor to growth was the COVID-19 pandemic, and the elevated demand added about 3 pts to organic net sales growth as the demand shifting towards at-home food as long as restaurants are closed and people stay more at home. 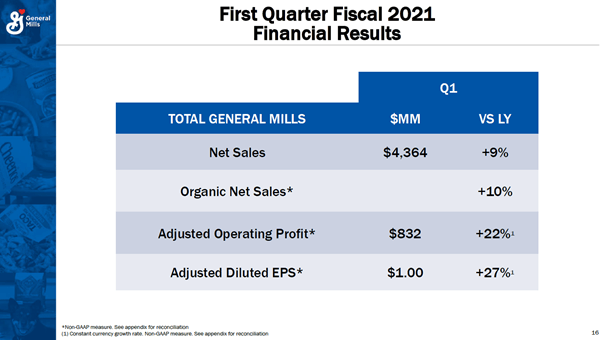 The last quarterly results were quite impressive, but for us, as long-term investors, we cannot only look at quarterly results. Instead, we have to look at the bigger picture to determine if General Mills is a stable business and solid investment for decades. First of all, we have to point out, that General Mills is a rather recession-proof business, and since the ’70s, the decline in 2018 was the steepest decline for the stock (and we are still trading about 17% below previous highs). In the other years, the sell-off was only about 30%.

When looking at some metrics during the last decade, we also see a stable performance. Not only were gross margin and operating margin more or less stable (with slight fluctuations), General Mills could also report an average RoIC of 13.07%, which is very solid. Both metrics also indicate General Mills might have an economic moat. 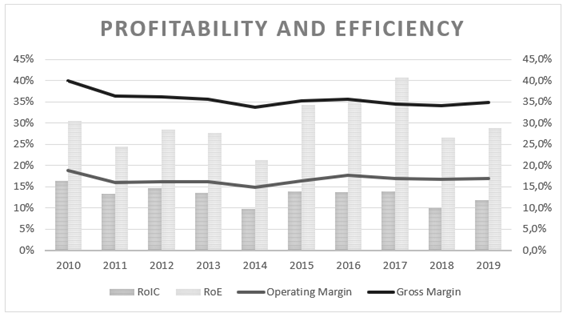 (Source: Author’s work based on numbers from Morningstar) 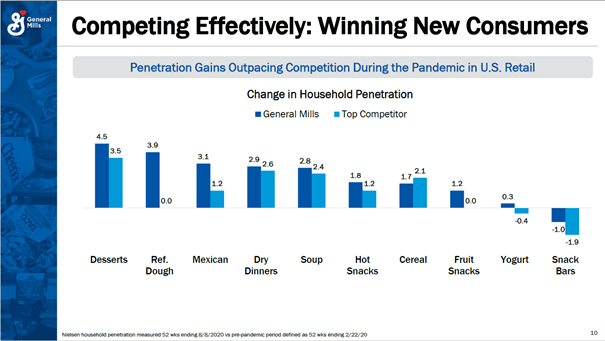 General Mills also has several major brands that are well-known. This includes the eight brands from the chart at the beginning, which are all brands that generate more than $1 billion in revenue for General Mills. The company is also market leader in many categories, and three of the top brands in the United States belong to General Mills.

This is not enough to lead to high growth rates, and General Mills will probably not be able to report double-digit growth rates. However, we should expect a stable performance, and the brand names generate a competitive advantage for the business.

While I was rather bullish about General Mills in my last article and called it a decent investment, I was cautious due to the rather high debt levels. I criticized the high D/E ratio of General Mills (2.2 at the time the last article was published) as well as the high amounts of goodwill that mostly stemmed from the acquisition of Blue. Goodwill was above $14 billion – about 46% of total assets. Goodwill is still about $14 billion, and with $31.3 billion in total assets, it is still reflecting about 45% of total assets. At least from this point of view, the balance sheet did not really improve. 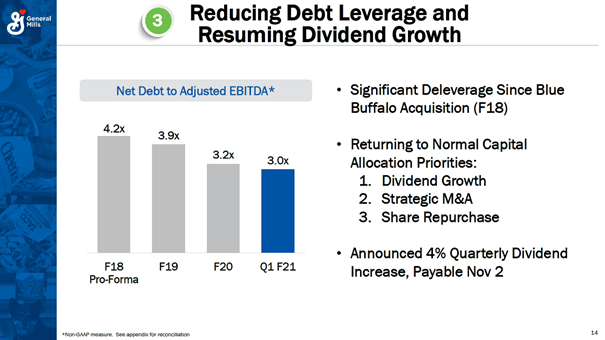 Another positive effect that goes hand in hand with the reduced debt leverage is the return to normal capital allocation priorities, which includes dividend growth. General Mills has a long history of paying dividends as the company and its predecessor firms have paid dividends without interruption for 120 years. General Mills has not increased its dividend every single year (and is not a dividend aristocrat), but since 1990 (the oldest data I could find), the company kept the dividend at least stable. 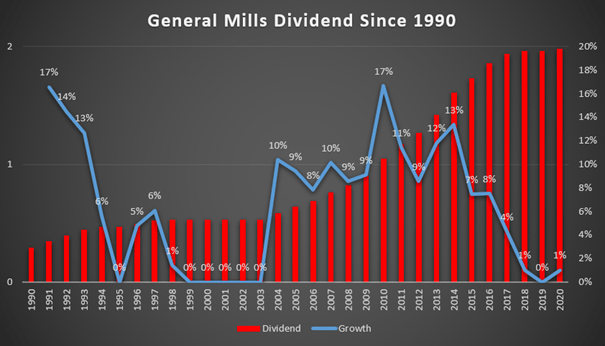 (Source: Author’s work based on numbers from Seeking Alpha)

Recently, management increased the dividend again after it was kept stable for 13 consecutive quarters. Two months ago, management announced a dividend increase from $0.49 to $0.51. This was only a dividend boost of 4%, but in a time where other companies are cutting or eliminating the dividend, a dividend raise is a good sign. Right now, General Mills has a dividend yield of 3.39%. The dividend can also be considered as safe. In the last four quarters, earnings per share were $3.74, which leads to a payout ratio of 55%. When looking at cash flows, the company paid out about $1.2 billion in dividends. Compared to a free cash flow of $3.2 billion, the company paid out less than 40% of the generated free cash flow.

It might also be the case that General Mills will start buying back shares again. When asked about this during the last earnings call, the CFO Kofi Bruce answered:

Look, our job that we declared at the beginning of the year on the balance sheet was really to get our debt to leverage back to below 3x to restore the strategic flexibility of the balance sheet. As you can imagine coming off of last year, we would expect a little bit of sort of choppiness in the cash flow. So, I think our first point of confidence is really to restore dividend growth and continue to make progress on de-leverage. We will assess the other capital allocation priorities based on the progress we make throughout the year.

Since the last article, General Mills improved its balance sheet and has increased the dividend – making it a better investment. But the price of the stock also increased, and it is trading about 28% higher raising the question if the price is justified, and General Mills is still a good investment. When looking at simple valuation metrics, General Mills is trading with a P/E ratio of 16 compared to a P/E ratio around 13 in September 2018. When looking at the price to free cash flow ratio, we are once again trading for about 12 times free cash flow – similar to September 2018.

While simple valuation metrics might indicate that General Mills may be a little more expensive than it was in 2018, we rather use a discount cash flow analysis to determine an intrinsic value for the stock. The free cash flow General Mills could report in the last quarter is the highest ever, and while that by itself is not unusual for a growing company, a growth rate of 42% compared to the last fiscal year, is quite impressive. In the years 2012 till 2019, free cash flow was between $1,629 million (in 2017) and $2,312 million (in 2013). Capital expenditures were also extremely low in 2020 – in absolute numbers ($461 million) as well as in relative numbers (12.5% of operating cash flow), it was the lowest in the last decade, and we must also wonder if this is sustainable. I would assume $2.5 billion in free cash flow to be realistic and a number we can take as basis (it takes into account that the free cash flow of fiscal 2020 might be an outlier but also reflects the improved business).

When trying to estimate which growth rates might be realistic, we can look at past growth rates. We can clearly see that General Mills was never a high growth company during the last decades, but it delivered stable growth. We can also see that growth seemed to slow down a little in the last few years.

Analysts are expecting General Mills to grow revenue with a CAGR of 1.4% during the next decade, and earnings per share are expected to grow with a CAGR of 5.1%. In my opinion, 4% growth for the years to come seems like a realistic growth rate. Revenue growth of 2% annually seems to be achievable, and an additional 2% can stem from the combination of acquisitions, margin improvement, or share buybacks. Using these numbers (and a 10% discount rate), we get an intrinsic value of $67.20, making the stock still undervalued a little bit.

When considering how extremely overvalued the market is right now, General Mills seems like a reasonable pick to invest in. The business is stable, the dividend yield is reasonable, and the stock is still a little bit undervalued. And although it would have been better to buy in 2018, it is not too late.